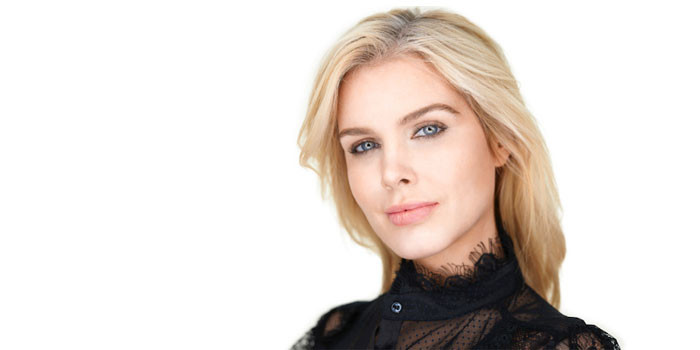 Jupiter, FL - November 24, 2020 - InFlorida.com has been hearing about a South Floridian actress making great movies with big stars. We caught up with Kate Katzman to ask her how she made it to the big time and what was it like to act with the likes of Robert De Niro.

IF: You moved from Philadelphia, PA to Florida when you were young, do you now consider yourself a Floridian?

KK: My grandfather was living in Palm City, Florida, and my Dad loved the area so much, we moved down. I was seven years old, so I have lived in South Florida for a while.

IF: Is it true you didn’t dream of becoming an actress when you were young?

KK: I was very shy when I was young and the idea of being on stage and having everyone looking at me was torture. I really love animals and originally, I wanted to be a veterinarian.

IF: How did you start in acting and how did Burt Reynolds have a hand in launching your career?

KK: I wanted to take up a new hobby, so I thought about acting. At the time we were living in Palm Beach Gardens and a mutual friend introduced me to Burt Reynolds. I mentioned that I was thinking of taking up acting and Burt said, ‘let me see what you can do.’ He gave me a script and said, ‘memorize this and come back in a week.’ A week later, I acted out the scene with Burt’s assistant, after which Burt said that he was really impressed and that ‘I had chops.’ He then told me he would teach me how to act. He really believed in me, and he was the reason I continued with acting and made it my career. He had a master acting group in Jupiter, Florida which would get together every Friday night. I auditioned in front of the class and I was admitted. Burt was very dedicated, even on his birthday he came to class.

IF: Who is the most important person in your life?

KK: My mom is really important to me. My grandfather and dad passed away when I was ten and it was just my mom and I in Florida. The rest of our family are in Pennsylvania, and my mom has always been there, giving me great advice.

IF: How do you use your celebrity status to benefit others?

KK: As of now, I wouldn’t really consider myself to have celebrity status. I have a great love of animals, so I would love to be involved in animal charities. My family has a farm we stay at in Pennsylvania during the summers, it’s a rescue farm. I would like to be more involved in things like that.

IF: Do you have a special diet and fitness routine?

KK: I have been a vegetarian since I was young. In terms of fitness, I vary. I like to be outside and walk when the weather is fine, I do yoga and right now I am doing self-defense classes. It really depends on my mood. Sometimes I’m just lazy and don’t feel like doing anything.

IF: Is there a Celebrity you haven’t worked with yet and would love to work with?

KK: I have been fortunate so many of the people I admire, I have worked with, like Robert De Niro and Morgan Freeman. In a couple of weeks, I’m off to Puerto Rico to film a movie called Panama with Mel Gibson. I have always admired Denzel Washington, and my husband is a big action movie junkie, so I would be pretty cool in my house if I worked with Keanu Reeves.

IF: How did you land the role as Megan Albert in The Comeback Trail?

KK: I was filming another movie in Alabama and one of the producers on that set was also a producer on The Comeback Trail. I asked if I could read for a small part, and the director liked my work and asked me to read for the larger part. I was so pleased I got the larger part because the smaller part was cut out.

IF: What was it like to work with the likes of De Niro, Tommy Lee Jones, Morgan Freeman and Zach Braff on The Comeback Trail?

KK: On my first day of filming, I shot my first scene, which was my character applying for the job of director in the movie. Robert De Niro was sitting behind a desk and in the corner was Tommy Lee Jones. I had not met Mr. De Niro before filming, and it was my first day on set. They know their stuff; we ran through it once and then we shot the scene.

IF: Tell us about the film Adverse (TBR 2021) and what was it like working with Mickey Rourke?

KK: This movie genre was very different than The Comeback Trail, which was fun and light. Adverse is dark and gritty. This was more of an indie film and also had great talent. Mickey Rourke is a big character and like me a big animal lover. He would come on the set with his little Pomeranian and his entourage, just how I imagined a Hollywood star to be.

IF: Will you ever move to Hollywood?

KK: Everything I have been shooting has not really been filmed in Hollywood. If I had to be in a certain location for work, then absolutely, but I will always have a place here in South Florida.

IF: Do you have a favorite beach or restaurant in South Florida?

KK: I lived In Palm Beach Gardens for the longest time and recently moved to Delray, so I’m still learning of all the great spots there. Atlantic avenue is fantastic with some great restaurants like Tramonti or Elisabetta’s. I have always loved the beaches in Jupiter.

IF: What does your family think of your rising fame?

KK: My family are proud and supportive; they are my biggest fans. When I was shooting The Comeback Trail, which was filmed in New Mexico in the Summer, I rented a house with my kids, a nanny, my Mom and my husband.

IF: What do you do in your free time?

KK: I have always loved to travel, so usually that’s what I love to do but not at the moment with COVID. That’s partly what I love about my job, traveling to new places and getting to meet interesting people.

Having a local Floridian actress succeed in such a competitive industry is something to be recognized and appreciated. This once again highlights the talent pool living in Florida. Congratulations Kate, the InFlorida team will be watching your career with anticipation.

By: Danielle Macdonald on Nov 24, 2020
Get More: Entertainment