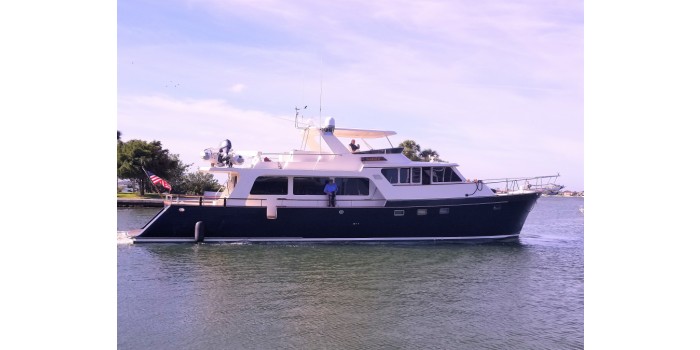 Bluebonnet has a Cherry Interior and was built to do the Great Loop. All her antennas, arrays and domes are on custom mounts that lower to a clearance of 18’04”. She has been constantly upgraded & maintained to the highest standards and is standing tall for your inspection.

Bluebonnet is offered for sale by her second owner. He is a very experienced mariner who has updated and upgraded many of the systems and equipment aboard. Along with the great customization done by the original owner Bluebonnet is an exceptional example of a wonderful yacht. In the Salon the hidden TV on its custom lift was re-positioned and is view-able from the recliner chairs as well as the settees. The optional Dining Room was enlarged for easier access to seat 6 in comfort & the entertainment center was modified.In the Pilothouse the dining settee was enlarged and has access from both ends. The 3rd stateroom has two LOWER berths making cruising with 3 couples civilized. This change answers one of the major complaints about the Marlow 65C/70E series.The Master Stateroom has a custom vanity and his & her heads with common shower between. This is a huge improvement without giving up the popular separate office and laundry area and hard to find on yachts under 100’.The Crew Quarters & head were enlarged & improved with easier aft deck access and numerous other refinements and enhancements. Bluebonnet is an opportunity to get a great yacht that really can “do it all”.

See the Business Behind the Story